How Alhaji OLANREWAJU KASSIM Set Up SHOKAS Industry In 1978 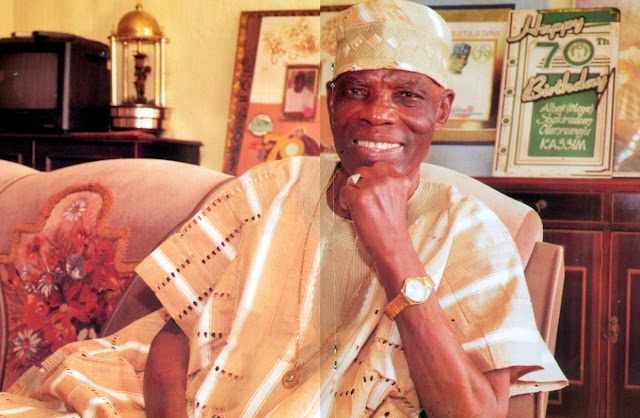 Have you ever heard of the name, Olanrewaju Kassim before? Have you heard of SHOKAS Lace Industry in Ijebu-Igbo, Ogun State? Do you remember that evergreen album done by King Sunny Ade in the 80s in which he praise-sang the owner of SHOKAS industry in Ijebu-Igbo, who lives inside a sprawling and undulating estate in his hometown where he built Bobagunwa Castle?

If all these do not ring a bell in your ears then this story is not meant for you. This is because Alhaji (Oloye) Dr. Shakirudeen Olanrewaju Kasssim is one of the pioneer industrialists in Nigeria, especially in the Textile sector of the economy. He is one man who pulled himself by the boot straps to rise to the top.

After doing a lot of petty trading and hawking textile with his mum when he was young he moved into the big business of manufacturing in 1978 and for years he was producing Lace fabrics locally from his Shokas Lace factory in Ijebu Igbo until the illegal smuggling in of laces by his competitors forced him out of business.

When he turned 80 three years ago grand old man of business revealed to City People his success story in business. Below is the story of his over 40 years of business and how he made it.

A new day dawned for Alhaji Kassim Odusote and Chief (Mrs) Ajatu Idowu Kassim on the 25th of June, 1936 at Ijebu-Igbo as the Odusoe Are-Ago family swelled its membership with the birth of a son of destiny. They named him Shakirudeen Olanrewaju Kassim.

His birthplace was meek and lowly. He arrived without the proverbial silver or golden spoon in his mouth but with the abundance of grace of the Almighty Allah which passes all human understanding.

His modest beginning had its first jolt by the death of his father when he was aged 9. He became a ‘helping hand’ to a mother whose means of livelihood was as a trader in textile materials.

Shakirudeen helped her by peddling her wares in the various surrounding markets, covering several miles of some days by foot. His reward was the hope of a primary school education which he realized by attending Ogbere Junior and Secondary Schools and Ojomo Primary School, Atikori which saw him through to his First School Leaving Certificate.

His adult working experiences, which are better described as “Divine Adventure,” started at the age of 18. Being a shop clerk and later a messenger and time-keeper at Costain West Africa Ltd, did not satisfy his entrepreneurial spirit. He decided to take his tottering steps with the merchandising of dried meat from Northern Nigeria followed by the running of a taxi-cab, both of which failed through his  inadequate appreciation of the risks, lack of financial resources and underdeveloped management skills.

Undaunted and unashamed, he knew he needed time for maturity and experience. He returned to the formal private sector as a driver in the Nigeria Water Resources Company. It was the period during which he learnt his past mistakes. It was the time he developed a greater focus on what he wanted to do and plan the strategies for implementation. His early experience in the hawking of textile materials for “Mama Aiyegbami,” his mother, re-surfaced at a higher level.

He was to return to the textile business, after two years in the service of the Water Resources Company, by the formation and registration of a trading company named The Western Sociable Store through which he imported woolen materials and guinea brocades from West Germany and the United Kingdom. He succeeded and further expanded his horizon into lace materials which he imported from Austria.

His suppliers were impressed by his capacity for hard work, honour and integrity. A robust credit line and mutual trust was the prize for his transparent honesty. The Divine component of his labours cannot be ignored. It was sometime in the 1970s when the Nigerian Government prohibited the importation of certain goods either to protect local manufacturers or stimulate local industrial manufacturing investments, Lace  material was one of them. His foreign suppliers had no doubt that a partnership with Alhaji S.O.Kassim was the new direction.

In his usual unselfish character, a new manufacturing company was incorporated in 1978 as Shokas Industries Limited. He had invited his bosom friend, the late Alhaji M.O. Shote, to join the effort; hence the acronym SHOKAS. The business grew by leaps and bounds so much so that a subsidiary grew for the manufacture of dyes and printed fabrics: It was Solaktextile Industries Limited.

In these ways, Alhaji S.O.Kassim generated thousands of jobs all over Nigeria not only at the manufacturing front but also by an expansive distribution outlet nationwide. His businesses which, not surprisingly, earned him a membership of the Nigeria British Chamber of Commerce, contributed significantly to Nigeria’s Export Promotion to neighboring countries, especially to ECOWAS.

These initiatives contributed to the Gross Domestic Product (GDP) and contributed to the conservation of Nigeria’s foreign currency reserves. Little wonder, he was among the recipients of Ogun State Merit Award “for his contribution to the industrial growth” of his home state in 1990.

His modest beginnings, no doubt, had great influences on his social and family outlooks. Recognizing that all he had been able to achieve was by the will of Allah, Alhaji S.O.Kassim, in many modest ways, continues to serve Allah with great religious fervor through community service participation and generous philanthropy.

Founding father of the Ijebu-Igbo Branch of the Ansarudeen Society in 1977, Chairman of ljebu IgboCIub from 1971 to 1999 and now Patron, Member and former President of Congress of Ijebu-Igbo Community Development projects which included the tarring of two roads at the Ijebu- North Local Government.

His activities did not go un-noticed or unrewarded by the entire Ijebu Community. HRM Oba Sikiru Kayode Adetona, CFR, The Awujale of Ijebuland, spoke the minds of all his subjects at home or in the diasporas when, in the letter, dated 20” April 1985 conferring on him the honour and privilege of Bobagunwa of Ijebu land, He wrote:

“It is of course significant that you have byyour exemplary life contributed to peace, progress and harmony in my domain and our beloved country, Nigeria” HRM Oba H. Olaoye Abass, Fiwajoye, The Bejeroku of Oke-Agbo,Ijebu-Igbo was to echo a similar encomium about 20 years later, on the conferment of the title: Balogun of  Oke-Agbo wrote: to honour some of our distinguished Sons and daughters who have contributed to the development of Oke-Agbo and, her people and the nation in general.”

His love for education must have had a bearing to his circumstances in early life. His passion for learning knows no bounds. No effort was spared to ensure that any of his children attains a level of education compatible with his or her abilities. Among his many children today, are many in the top hierarchy of Medicine, law, Business and Accountancy to mention a few.

His passion extends beyond his immediate families and relations to many who have abilities but are short of the means to accomplish them. Today, by his contributions, an oncologist, two nephrologist, a gynecologist occupy exaulted positions in leading national medical institutions of clinical services, learning, teaching and research.

So pervasive are his activities in the education sector, that the Olabisi Onabanjo University in 2007 awarded him Doctorate Degree in Business Administration {Honoris Causa}for his meritorious services to the University especially in the founding ofthe first State-Owned Medical School in Nigeria. He was a member of the Olabisi Onabanjo University Joint Advisory Council, and a member of the Obafemi Awolowo College of Health Sciences Advisory Council, the latter of which dated as far back as 1987.

He incurred great personal expense in the reconstruction and renovation of an Out-Patient Complex of the General Hospital, Sagamu, inclusive of internal and external furnishings, to the standard required for the take-off of a nascent Teaching Hospital.

His support did not dim with the euphoria of a successful accreditation of a premier State Medical School by the “Medical & Dental Council of Nigeria, but further boosted his resolve to ensure its continued growth and survival.

He single-handedly sourced for accommodation for medical students resident in Sagamu, provided and maintained a 52-seater bus to ensure the continued linkage of the medical students with activities on the main campus at Ago-Iwoye.

His confidence was confirmed about 10 years later, when the year 2000 annual assessment report of the National Universities Commission named Obafemi Awolowo College of Health Sciences {OACHS}and the Olabisi Onabanjo University Teaching Hospital {OOUTH}as the medical school with the best undergraduate programmes in Nigeria.

There are more that can be said or written about this great man. Omissions are inevitable for most ofthem will be added illustrations of a life in glorious transition. In 1994, a polite invitation to be Chairman of the annual University College Hospital, Ibadan Open Day celebrations {the premier Nigerian citadel of medical education, teaching, research and training in all aspects of health specialization}evoked an unexpected endowment of the Alhaji Arigbabuwo Nursing Reading Room by Alhaji Kassim in the memoryofhis father!

There are limited ways a nation can really identify and thank those who play their part in nation-building if such potential beneficiaries prefer the blessings of the silent giver. But society owes this silent majority recognition if only to encourage her silent majority that nation are built, not necessary by the quality of the governance alone, but also by the loyalty of its citizens in their private ways and by the conduct of their private lives.
Posted by Fashion And Beauty at 11:45 AM