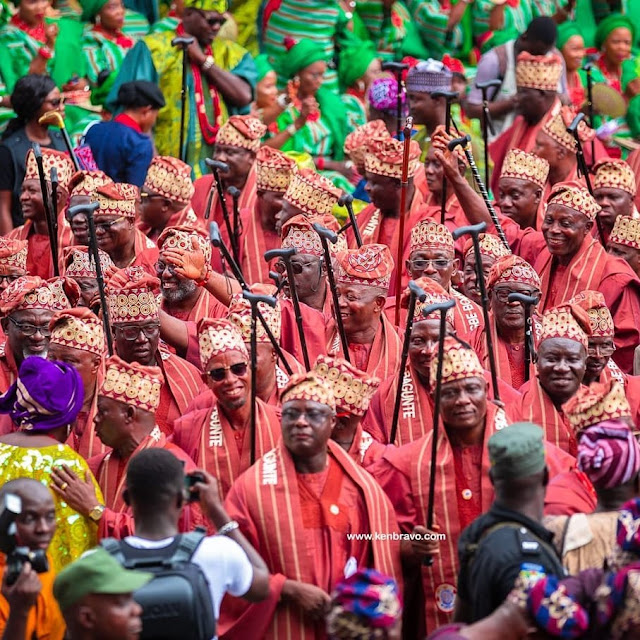 At the just concluded 2019 Ojude Oba Festival, members of the Egbe Bobagunte Okunrin Akile Ijebu dazzled as they filed out to pay homage to the Awujale of Ijebuland, Oba Sikirin Adetona. Many didn’t know that the new Governor of Ogun State, Prince Dapo Abiodun is a member of the group. He stood up from his seat to dance with fellow members.


After the ceremony held at the Awujale’s Pavilion, members retired to the brand new Bashorun Fasasi Adesoye Memorial Hall on Molipa Road, off Abeokuta road in Ijebu Ode for a grand reception. The hall has a 2,500 sitting capacity. Egbe Bobagunte (Okunrin) Akile Ijebu is one of the prominent age-grade groups called “Regberegbe” in Ijebuland. Like all other “regberegbes”, Egbe Bobagunte (Okinrin) Akile Ijebu derives its authority from the Awujale who is the paramount ruler of Ijebuland. Bobagunte was royally chartered on March 28, 1998 by Oba Sikiru Kayode Adetona, Ogbagba II, CFR, JP, Awujale and Paramount Ruler of Ijebuland at the Heritage Hall, Afin Awujale in a well-.attended ceremony dubbed Royal Blessing/Traditional Recognition. It was a colourful ceremony full of pomp and pageantry.

Mission Statement
Determined to leave our footprints in the sands of time, we, the sons of Akile Ijebu born between January 1, 1959 and December, 31, 1961, have come together, under the royal umbrella of EgbeBobagunte (Okunrin) Akile Ijebu, so conferred on us by the Awujale (the custodian and sole authority of Ijebu cultural heritage), to put all the resources at our disposal to foster:
·The development of our ancestral root
·The improvement of the lot of our members
·The upliftment of the Nigerian society;
Believing that this will make us relevant to the needs and aspirations of the present and future generations of Ijebus in particular and Nigerians generally.

Aims and Objectives
·To promote the Social and economic development of members; among the people of AkileIjebu and Nigeria in general
·To sustain and promote the cherished cultural heritage of AkileIjebu
·To encourage understanding with other EgbeIbile with similar objectives for the unity and progress of AkileIjebu and the country as a whole
·To contribute towards the development of Akileand engage in all other activities that will enable the Egbe to accomplish its objectives.

Membership
Membership is opened to all sons of Ijebuland born between the years 1959, 1960 & 1961irrespective of profession, religion or social strata. We have also in furtherance of inclusiveness open our membership to spouses of Ijebu daughters so interested in our traditions and cultural heritage.

FORMATION
The inaugural meeting of Egbe Bobagunte (Okunrin) AkileIjebu was held on April 17, 1997 at Gateway Hotel, Ijebu Ode (now Equity Hotel). It was a meeting put together by “Austin” Adesanya Yusuf (now GiwaEgbe), TaiwoAdeniji (now Asiwaju Egbe), Kemi Lawal, .and GboyegaAdesoye (now Balogun Egbe). It had logistical support from the likes of SegunDaranijo (now Baagbuyi& Gen Sec), S.K Akinsanya (Ijaodoro) and Gboyega Alatishe (now OtunGiwa).
It was from that meeting the seed of  Egbe Bobagunte (which had been conceived by the trio of Giwa Adesanya Yusuf,  Asiwaju Taiwo Adeniji and Kemi Lawal) sprung up. Giwa Adesanya Yusuf and Balogun Gboyega Adesoye could be termed as Chief Operating Officers or midwives then.
The Egbe at the inaugural meeting formed a steering committee which gave the Egbe its structures and midwifed the elections of officers who in turn organised its Royal Blessing & Traditional Recognition by Alaiyeluwa Oba Sikiru Kayode Adetona, CFR, Ogbagba II, Awujale& Paramount Ruler of Ijebuland on March 28, 1998.

STEERING COMMITTEE
There were a lots of behind-the scene moves of alignments and realignment of people and interests before the “midwives” could put together the inaugural meeting. That on its own is a story for another day.
The mobilisation of members for the inaugural meeting was extensively done and to the glory of God we had One Hundred and two (102) people in attendance. The first major task of the inaugural meeting was to appoint a committee which was tagged as the Steering Committee. This committee was put in place as an interim body to oversee the affairs of the Egbe till substantive officers were elected. The members of this committee were:
(1) “Austin” Adesanya Yusuf.   -  Chairman (now Giwa Egbe)
(2) Segun Tai Daranijo. - Secretary (now Baagbuyi& General Secretary)
(3) TaiwoAdeniji (now Asiwaju Egbe)
(4) Alh. GboyegaAdesoye (now Balogun)
(5) Kemi Lawal (Chairman,A Steering Committee preceding Elections)
(6) Alh. GboyegaAlatishe (now Otun Giwa)
(7) KunleOtubu (now Olorogun Egbe)
(8) Engr. BiodunAlli-Oke (now Atunluse Egbe)
(9) AyokunleDongo (of Blessed Memory)
(10) Wale Tawak (Basorun Egbe)
The Steering Committee as it were became the first formal body of the Egbe. The body ran the Egbe for about 7 months before handing over to elected officials. The Steering Committee in conjunction with the general assembly during the course of its tenure appointed the following ad hoc committees:
Screening Committee Chaired by  HBA Fetuga (now Treasurer)
Finance Committee –Chaired by Ganiu Bello (formerly Treasurer Egbe)
Liaison Committee - Chaired by Arc Diran Eyinfunjowo (now Otun Basorun Egbe)
Publicity Committee – Chaired by Lanre Hassan
Constitution Drafting Committee - Chaired by Wale Tawak (now Basorun Egbe)
Gunte Electoral Committee (GECOM) - Chaired by Babatunde Rufai - Lariba (now Ba’agbimo Egbe).

STRUCTURE
Giwa-in-Council
Egbe Bobagunte (Okunrin) is led by its Giwa- Otunba Adesanya Yusuf  (OtunbaBobaseilu of Ijebu) ably supported by OtunGiwa – Otunba Adegboyega Alatishe (Otunba Baderoof Ijebu) and Eta Giwa - Hon Kemi Banjo (Former Chairman of Lagos Mainland Local Government Authority)
The management of the Egbe is vested in the Giwa-in-Council (Executive Council)headed by the Giwa whose position is for life by the authority of the Awujale. The Egbe in its wisdom has after a couple of years of existence for reasons of stability opted to make the positions of the Otun Giwa and Eta Giwa permanent and both officers are also members of the executive council. Other members (which are elected every three years)are: General Secretary, Assistant General Secretary, Treasurer, Financial Secretary, Social Secretary I, II & III, Public Relations Officer (Akede), Welfare Officer and Legal Officer ( Bamofin).

BOARD OF
TRUSTEES (B.O.T)
The Bobagunte Board of Trustees is a very important and revered organ of the Egbe and membership of this board consists of some honorary traditional title holders of the Egbe and the Giwa, Otun Giwa and Eta Giwa. The functions of the board are
I. To act in advisory capacity to the Executive Council and the Egbe
II. To consider issues and discuss matters affecting the Egbe in conjunction with the Executive Council
III. To assist the Egbe in any capacity and help register the name of the Egbe with the appropriate authorities according to the acts of law.
IV. To always act as transitional government before any election of officers in any election year.

HONOURARY TITLE HOLDERS
The Egbe has in its fold a body tagged Honourary Title Holders. These are members who have contributed morally and financially to the upliftment of the Egbe and so recognised by the Giwa.

Egbe Bobagunte at its inception conceived the idea of having international chapters as a viable act of bringing the much cherished Ijebu culture and traditions close to people of our age grade in the diaspora. To the glory of God, the lofty dream was realized on October, 11, 2008 when Egbe Bobagunte Akile Ijebu UK chapter was launched by our revered Alaiyeluwa Oba Sikiru Kayode Adetona, CFR, JP Awujale and Paramount Ruler of Ijebuland, supported by  HRH Oba Y.O Adekoya – Dagburewe of Idowa, representative of The Nigeria High Commission, U.K. and other notable personalities. The presence of the Awujalein personally giving our International Chapter his royal nod and traditional blessing was a rare privilege for which we remain eternally grateful.
The UK chapter is led by Alhaji Kassim Haruna-Ishola, as Asoju Giwa and recently celebrated their 10thAnniversary in London.

Egbe Bobagunte Ireland
The success achieved in the UK propelled the Egbe to establish the Republic of Ireland chapter in February 2009. The Republic of Ireland Chapter, like the UK Chapter, is also headed by an Asoju Giwa, and currently, plans are in top gear for the celebration of their 10th Anniversary in Dublin in 2019.

Annual Ojude-Oba Festival
Egbe Bobagunte has been a consistent player and a trailblazer in the traditional homage to the Awujale during the Annual Ojude-Oba festival. We have been an Egbe who has introduced various innovations to the Regberegbe Parade at the yearly Ojude Oba. In the Globacom Sponsored Inter-Regberegbe Competition, Egbe Bobagunte (Okunrin) Akile Ijebu was adjudged first in 2013, second in 2014 and second in 2016.

1. PROJECT DEDICATION
Egbe Bobagunte celebrated its 20th Anniversary in August, 2018 with activities commencing from August 17, 2018. Amajor highlight of our celebration was the dedication of a twin bungalow at the OGD Estate, Sabo-Itanrin Road, Latogun Junction, bought from the Ogun State Government and completely remodeled donated to St Mary’s Catholic Eye Hospital, Ago Iwoye, to serve as an outreach centre to serve the people of Ijebuland and others from far and wide. 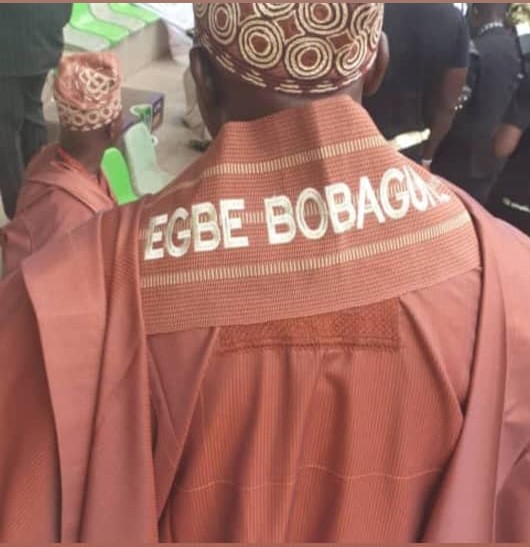 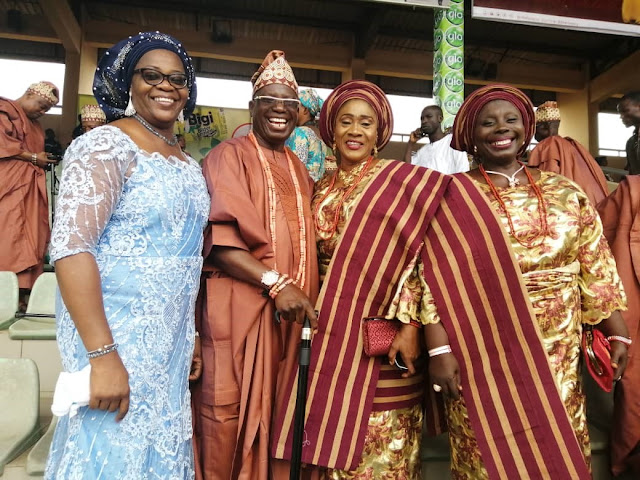 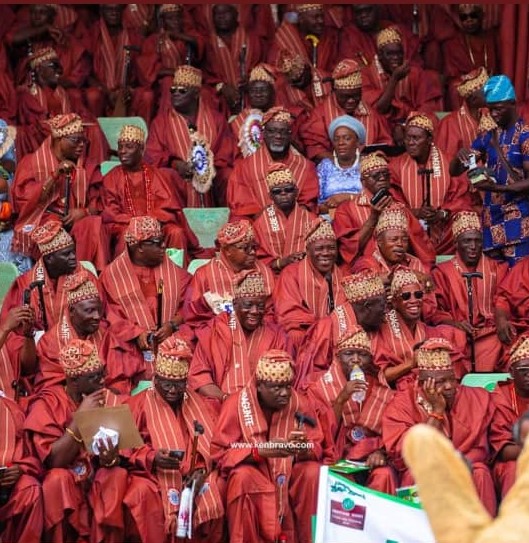 Posted by Fashion And Beauty at 10:55 AM