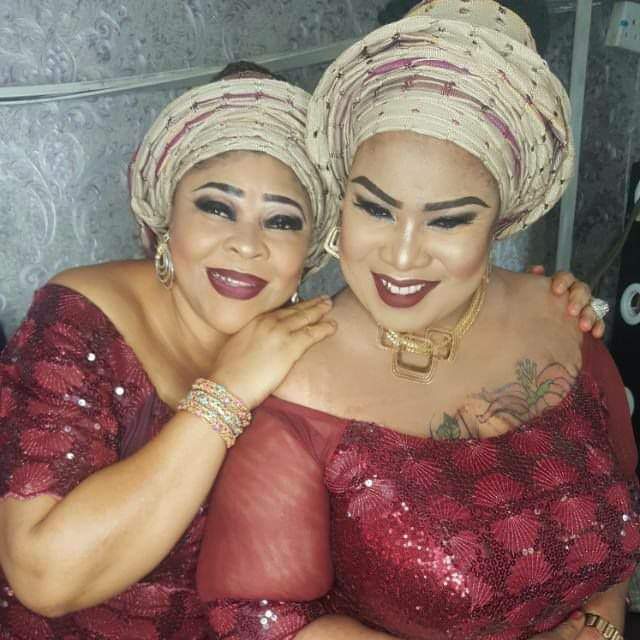 This year’s Ojude-Oba was a Festival of colour. This is because many society women looked colourful and they stepped up their fashion game at this year’s Ojude-Oba. They looked classy in the eye catching attires, matched with luxury 18carat Gold. It held on Tuesday 13th of August 2019 at Oba Sikiru Adetona, the Awujale of Ijebu’s Pavilion.

The event was one of its kind. It was a memorable one as no age grade wanted to be left out of the glitz and glamour that always follow the event of the day. The Age Grade group popularly known as Regberegbes all came out to steal the show, their guests were not also left out of the Glam look which preceeded the colourful event.

As usual, many age grades were dressed in unique beautiful attires while many female celebrity women made fashion statements in their uniformed attire. One thing that stood some of the female Regberegbes out is that, many of them rocked matching shoes, matching jewelleries, same make-up and same headgear styles as they all came out to display and dance amidst singing and drumming. 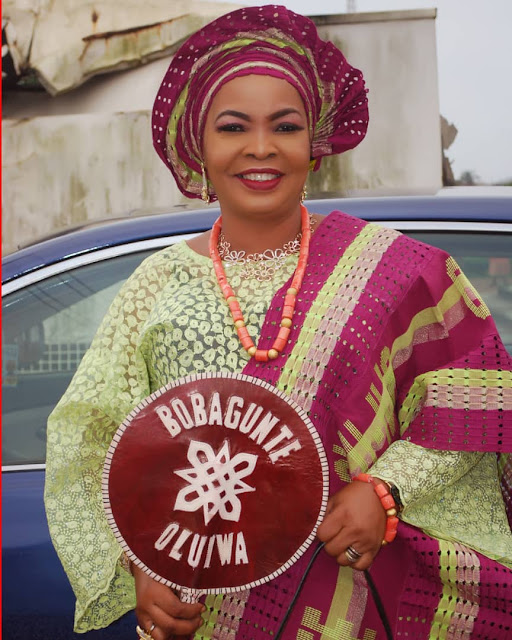 Perhaps we should also let you know that the over 100-year-old festival welcomes over 45,000 visitors every year. They come singing, dancing and drumming to pay homage to the paramount ruler of Ijebu-land, HRH Oba Sikiru Kayode Adetona, Ogbagba 11. Oba Sikiru Adetona.

As early as few minutes past 10am, the whole pavilion was filled with beautiful women who set the tone for the event. One of those whose fashion statements wowed many at 2019 Ojude-Oba was Olori Kemi Adetona, the pretty wife of Awujale of Ijebu, Oba Sikiru Adetona. She walked into the entrance at few minutes past 9am sitting pretty in a cream gold HoH Luxury Lace Adorn With Beautiful 18carat Gold.

While many were busy admiring Olori Kemi Adetona, the CEo of Kroyal, the wife of Ogun State Governor, Her Excellency, Mrs Dapo Abiodun looked pretty in a bottled green lace matched with a well wrapped aso-oke which she adorned with an exclusive 18carat Gold. There is no doubt that the Wife of Ogun State Governor pays attention to details whenever she steps out. 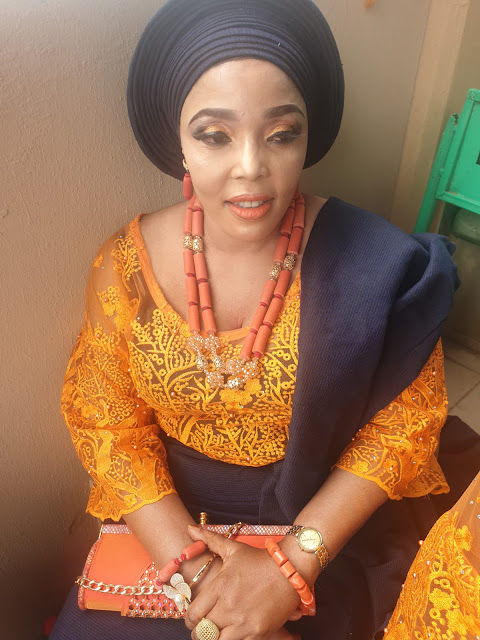 What about Otunba Laide Fowosere's wife, Hajia Aminat Fowosere, the Mulato skinned wife who stood out in Lemon monotone HOH lace matched with 18cartat Gold? She enjoyed the event with Mrs. Qudus who was spotted in cream lace.

Did we tell you Hon Adijat Adeleye Oladapo, the former House of Assembly member stole the show with her clique of friends? She sat beside Mrs Femi, that Mulato big babe whose look always makes many heads turn at Lagos Owambe.

Alhaja Fatimo Adegunwa, the wife of Fototek boss, Alhaji Abdul lateef Adegunwa may look casual in the Ankara rocked by their staff for this Ojude-Oba, but her style and panache can’t be ignored at the event. Of course she rocked one of her numerous collections of Diamond matched with precious a luxury pair of slippers.
Let us gist you about some popular Iyalodes whose fashion statements made tongues wag at 2019 Ojude-Oba. One of them is Iyalode Folasade Kasali, the Iyalode of Egbe Tobalase Obinrin Obalofin.  She stood out in Bottle Green Lace with Emerald green Aso-oke. 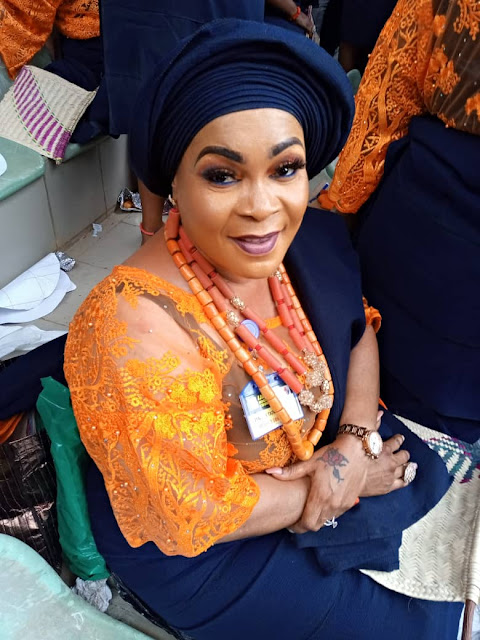 Her choice of jewellery also complemented her attire.  What about Iyalode Bobagunte Akile Ijebu, Iyalode Korede Alatise? She rocked the burnt Gold damask aso-oke matched with 18carat gold. Of course many didn’t  expect anything less of standard from her.

She is the Iyalaje of Ijebu-land and she is also one of the close friends of Otunba Folasade Adesoye. Did you see Iyalode Arobayo Akile Ijebu, Alhaja Odumosu? Her choice of Orange and blue black aso-oke picked by their Iya egbe, Otunba Risikat Folasade Adesoye made her and her group stand out from the crowd. Did you spot Iyalode Yemisi Awe, the fabric merchant in Saudi Eko whose 18carat Gold stood pretty on her neck? Don’t forget her elder sister,

Do you know that Keji Atoyegbe is the  Iya Egbe Obayori led by Giwa Suraji Lasisi? This pretty society woman dazzled at this year's Ojude-Oba with her bestfriend, Alhaja Dupe Sanni aka Shineshine. Many couldnt take their eyes off them when they both stepped out in the same handcut Majenta lace matched with 3 tone 18carat Gold. Alhaja Suliat Malo also dazzled an a exclusive lace matched with a purple headgear and white 18carat Gold. 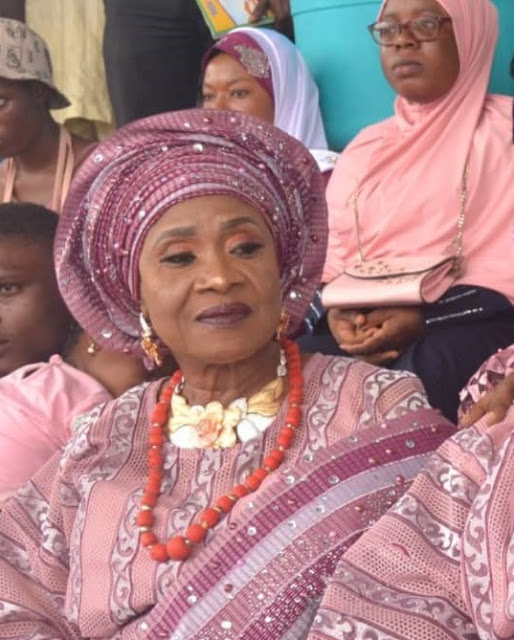 So, Let’s take you through how the female Regberegbes dazzled at 2019 Ojude Oba. For many of them, it was not just about what they wore, their choice of jewellery also mattered.  It took many of them over 10 months to decide on what to wear, where to buy the fabric from, which jewellery to choose and with which shoes to match.

One female group that many haven’t stopped taking about till date is Egbe Bobamayegun Obinrin,  They are the age grade between 1974/75/76. Their colour was simply unique with the combination of Champagne Gold Buba and Red Aso-oke. They were led by their Iyalode. It comprises of 100 beautiful women who run good businesses. Their shoes and purse also complimented their attire for the massive event.

Do you want to know why they won? They had a traditional attire called ``Sanyan and Alari pupa``. This is an ancient way of dressing where the wearer wears headgear, and uses Iyun bead as jewellery on the hair, neck, and legs. Among members of their Egbe is Yetunde Dosumu Anifowose(United states), Adeola Mabifa(United States), Yemi Hammed, Seyi Kazeem, Tosin (London) to mention a few.

Another female celebrity Regberegbes who impressed at 2019 Ojude Oba is Egbe Tobalase Obinrin Obalofin. Dont forget that their Iya Egbe, Ayimba Yemisi Fasawe is a top fabric merchant in Lagos.  It was Iyalode Folasade Kasali that led them into the pavilion. Not only is their attire unique Bottle Green it was matched with Emerald Green,

Just like their name, Egbe Jagunmolu Obinrin Stainless(1965-1967) they looked ever so beautiful at 2019 Ojude Oba. Their Iya egbe, Alhaja Amudalat Stainless led her age grade who stunned many in their attires too. They were clad in Majenat lace matched with a yellow headgear and a matching yellow purse and shoes.  Alhaja Mosun Kay, Alhaja Abukia Akanke, Adeyinka Ajenifuja, Alhaja Fausat Ailere, Alhaja Omowunmi Adebanjo, Abiola Lawal Adetutu, Princess Adetoun Macaulay were among many sighted at this year’s Ojude Oba.

Though this age grade are in their 70s but they know the rudiment of fashion and spared no cost to make sure they were noticed. We are talking about Egbe..Obaleke Obinrin(1944 to 1946). Their Iyalode is Ronke Olowu. Other members are Alhaja Busura Alebiosu, Bewaji Kuku, Bola Owoduni Tinubu, Ronke Olowu Alausa, Sola Adaranjio, Jumoke Yussuf, Doyin Ayanbadejo, Bintu Osibo to mention just a few.

The Iya egbe Arobayo, Otunba Folasade Adunni Risikiyat may have gone for this year’s Hadji, but she made sure her daughters stood out at 2019 Ojude-oba. Egbe Arobayo dazzled in orange lace matched with Blue black headgear. It was  Iyalode Taiwo Odunmosu who led her age grade. Though they now have new members, they all looked pretty and well prepared for 2019 Ojude Oba. Among those new members sighted were Omolade Akinola,

If there is any Regberegbe who didn`t let others outshine them, at 2019 Ojude Oba, it is Egbe Gbobaniyi Obinrin. Their cobalt blue aso-oke made them look unique. They also rocked unique eye glasses that added to their beauty. They had matching shoes, purse, and jewellery too.

What about Bobagunte Omoba Akile Ijebu headed by Iyalaje General of Ijebu-land, the rich Ijebu business woman who is one of the closest allies of Olori Kemi Adetona?

Last on the list of female celebrities who dazzled at 2019 Ojude Oba is Egbe Arobayo Larotex  who are those between the age grade of  1968/ 1970. They were in orange buba and multicoloured aso-oke as wrapper. The Iyalode Bisola Abatan was with the Otun Bolanle Basherah Yekeen, Abiodun Akinlabi, Tope Onabule, Adeola Tijani, Islamiyat  Fasina, Joke Adesnaya, Adijat Ogundana, Fareedah Ayomide and many others.

Posted by Fashion And Beauty at 12:13 PM